Deprecated: Function Elementor\Widgets_Manager::register_widget_type is deprecated since version 3.5.0! Use register instead. in /home/vkewuma7nwqd/public_html/wp-includes/functions.php on line 5383

Swipe Left is a Brit-Rock, alt/indie exploration of the modern world. Less apocalyptic and dystopian than Tales From Armageddonsville, it still carries a potent lyrical message, while still being playful.

The album opens with a short vignette called Doomsday Clock. Its sinister ticking is abruptly interrupted by the sonic assault of Cornucopia Croaked, an energetic exploration of our destructive tendencies. DefCon 1 kicks out at the threat of nuclear war but ends in defiance, “Rain, Rain on me.”

Gods of Folded Bills laments the loss of species we once took for granted. Superglue talks about karma, “Don’t you know that what you do, sticks to you like superglue?” Angel’s Landing is set in Zion, Utah. It explores the uncertainty of stepping into the unknown. Picture of a Man explores misogyny and control within relationship. Guess Which Number relates a divorce told within the context of two laughs. Father of Lies examines a conspiracy behind historical events. It’ll Be Alright is a reassuring diversion. Forget worry, it’ll be alright. Punk Rock is Dead tells how the ethos of punk was monetised by capitalism. Sacred Book of Lasts returns to environmental concerns while Steel September Skies talks about inequality and how we don’t care as long as we are one of the ‘winners’. 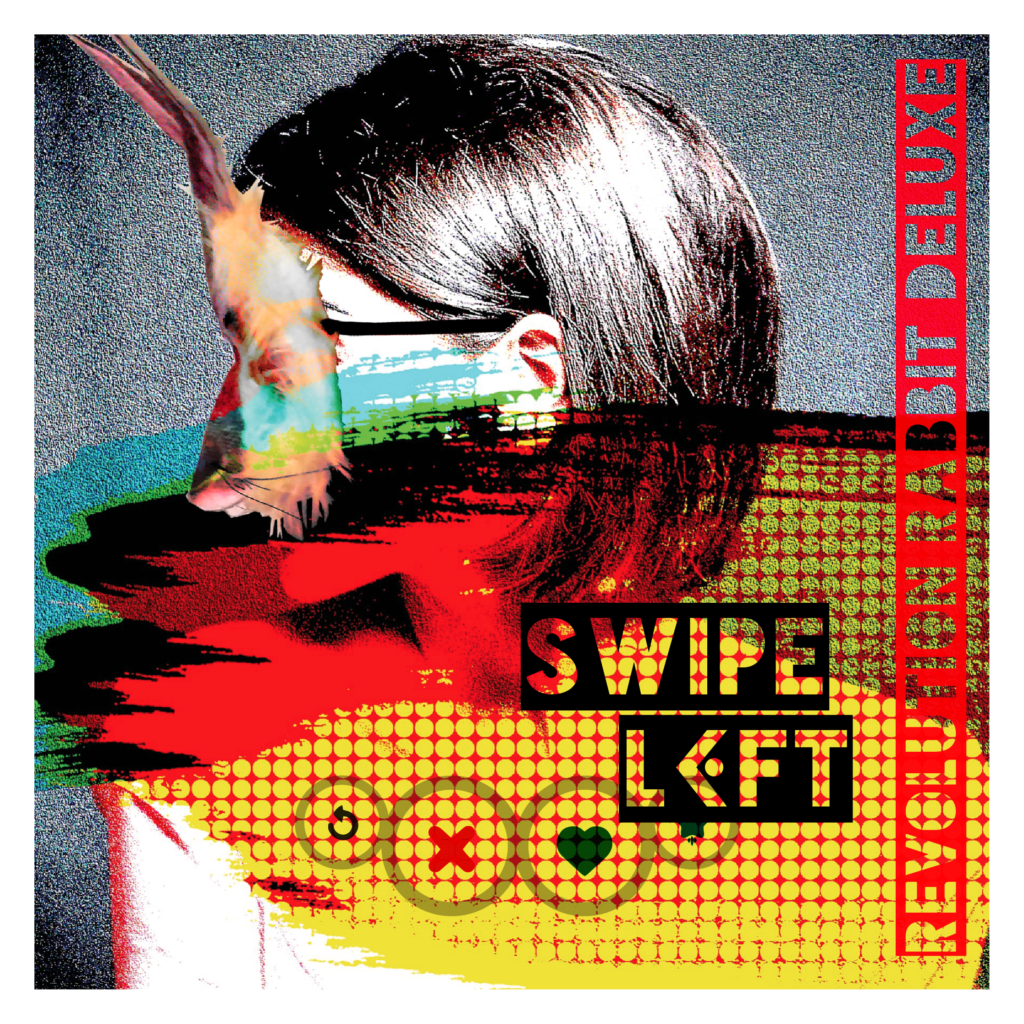 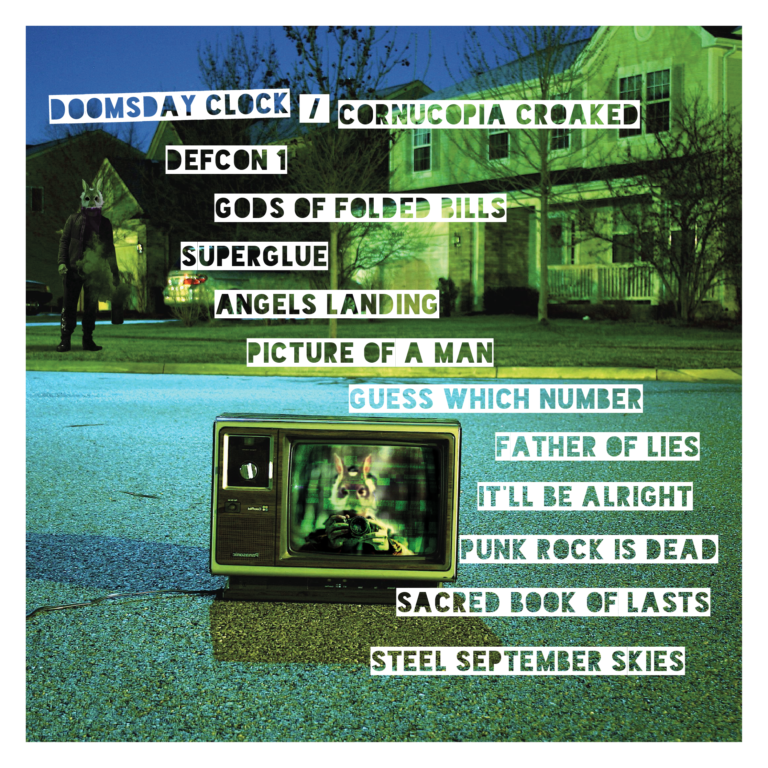 There are all kinds of places to listen and/or buy RRD tunes.

Listen and/or buy from iTunes.

Listen and/or buy on Amazon.

I recently found a new band on Twitter. Not my usual hunting ground for new music. However I was pleasantly surprised to have a band fall into my lap.

REVOLUTION RABBIT DELUXE – This four-piece from the South Wales valleys describe themselves as a “power pop, Brit Rock, indie project.” I listened to their album and I have to say… I was surprised. I dont know what I was expecting with their description but they are EXACTLY what they say they are, power pop, Brit Rock and indie. The album, Swipe Left, is a fantastic listen. Honestly it took me back to 1996. I felt like any song off this album could have been on a “Best of Brit Rock” compilation. It’s the album you want on a good old casette tape. You can tell the guys have put a lot of time and effort into this. I found it hard to pick out one standout song because I genuinely enjoyed them all. I will however mention Punk Rock is Dead purely because it’s genius and I haven’t stopped singing it for days.

The album has 12 tracks, and I’ll touch on what I think are the highlights. RRD gets right down to business on the opening track Doomsday Clock/Cornucopia Croaked, a rousing foot-stomper about mankind’s relentless assault on our planet. The track starts off with what sounds like a huge ticking clock in an empty room, backed by distant sounds of civil unrest. At the 30-second mark, the clock stops and we’re hit with a barrage of gnarly distorted guitars and hammering drums, driving home the urgency of the subject. Rev Rab issues a scathing assessment of our destructive tendencies: “We tore down the hills. We dug up the valleys. We pulled down the trees. Replaced them with concrete. And it’s goodbye world… Cornucopia croaked. Strangled by plastic. All the floodplains soaked. Need to do something drastic.” Keeping with the theme of earthly degradation, Gods of Folded Bills speaks to how greed, over-consumption, and the downside of capitalism have led us toward the looming prospect of our own demise: “We sold out to darker powers, and all the while, we pray to gods of folded bills. There’s no return, we’re driving down a one-way street. There’s no concern, as the rhino joins the queue.” The song has a cheerful synth-driven melody that belies the darker lyrics.

So too with Superglue, its catchy new wave/psychedelic grooves in contrast with the more serious subject matter.  “Can’t you tell this fragile shell on which we live…is gonna give… The edifice you’re building in your heart. A monument to pride. A prisoner inside. A prisoner to hide. The prisoner is you. And my advice is pull it down, tear it down, smash it down.”

Picture of a Man is a rather somber song about a man who puts forth a charming, gallant image at sharp odds with his shortcomings and cruel nature: “Don’t you paint a fine, fine picture of a man. So subtle, so refined, so charming, so cultured, so well-groomed… A player, you play her well. You beat her, you cheat her. Please leave her, relieve her. Just walk away. But freedom is what she wants from you. The one thing you can’t give”

Guess Which Number is a sweet tune, with sparkling synths and a lovely piano-driven melody, while Father of Lies pays homage to David Bowie’s Heroes with its similar iconic driving riff. One of my favorite tracks is Punk Rock is Dead, a bouncy punk-infused song about how societal pressure to conform killed off the free-thinking, anti-establishment spirit embodied by punk: “Take a message. Subvert it. Pump it out as truth. Take a free man, create dependence, erode away identity. Millions like him share the uniform of corporate rebellion. Punk rock is dead. Who killed it? Punk rock is dead. You killed it. Punk rock is dead. We killed it.”

Steel September Skies is a complex and haunting track. It begins with a gently strummed folk guitar, then a thumping drumbeat ensues as Rev Rab describes what starts off as a bucolic scene that quickly turns ominous; symbolising a nation formerly at peace but now plunged into an authoritarian regime or civil war: “A picture-perfect parade winds down my street. As adults clap and children cheer, frozen in time. I hear the crash of jackboots black. Let’s change the scene. Ignore the screams… My mother’s arms holding me tight, keeping my safe. I try to smile, but my belly aches, there’s flies in my eyes. And then the screams, my mother screams.” The music intensifies as his vocals turn urgent:“I am just one man, got no master plan. But I’ll try to stand if you’ll take my hand. Til the sun turns black, Til the sky is cracked. Til the curse lies choked, I will cling to hope.” Suddenly, things turn around to a more positive, hopeful tone: “Parade’s rewind and jackboots fade. All our wrongs are being undone, the guilty can’t run. It’s time to live, it’s time to love. I am just one man, got no master plan…” The music calms back down to the gently strummed guitar as the song fades out. It’s such a powerful and stirring song.

Swipe Left is another strong work by Revolution Rabbit Deluxe. Given their unique, sometimes unorthodox sound and deep, thought-provoking lyrics, their songs often require a couple of listens to unpack and fully appreciate all the nuance to be discovered within them. Putting forth the effort pays off nicely once you come to realize the high quality of their music.

All my inner alarms started going off like a jail-break klaxon when I heard RRD were releasing a second album so soon after their debut. I was worried that after the success of their first, this would be the infamous ‘difficult second album’ – But I needn’t have given it a second thought because Swipe Left is jam packed with RRD’s trademark ear-worm melodies and hard, punchy tunes.

There’s elements of Pink Floyd, Television, Talking Heads and a bit of Lennon’s nasal sneer. This really is a class rock album of some note. Those familiar with, Blackwood punk rockers, 100,000 Bodybags will have trouble aligning their quiet, masked guitarist with this charismatic frontman – but frontman he is and he certainly knows how to whip up a crowd at live performances. Check them out if you can at one of their live gigs. RRD are quietly getting quite a reputation for themselves and Swipe Left will do nothing to assuage this rollercoaster ride to the top. Definitely ones to watch in 2020.

Return to Our Albums